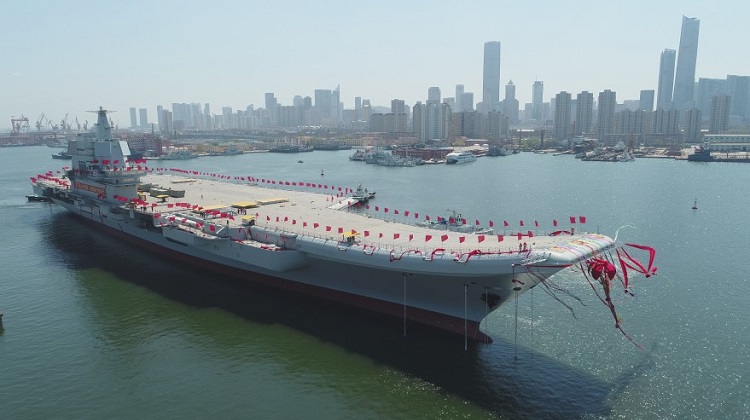 A still frame from a Chinese state media news report after the launch of CV17.

The second aircraft carrier for the People’s Liberation Army Navy (PLA-N), and the first to be built in China, has commenced sea trials off its home port of Dalian.

Formerly known as Varyag and a sister-ship to the Russian Navy’s Admiral Kusnetsov, CV16 was acquired as an incomplete hulk from the Ukraine in the late 1990s ostensibly to be used as a floating casino or amusement park, but which instead was extensively refurbished in the 2000s.

The Type 001A has a similar hull and overall dimensions to Liaoning, but reportedly features upgraded machinery, phased array air-defence radars, and other advanced sensors and defensive systems.

“The sea trials will mainly test the reliability and stability of the carrier’s power system and other equipment,” Chinese state media said. “Construction on the carrier has been carried out as planned since it was launched in April last year, and equipment debugging, outfitting and mooring tests have been completed to make it ready for the trial mission at sea.”

Both Liaoning and the Type 001A can embark about a dozen J-15 Flying Shark fighters which are developed versions of Russia’s Su-33, as well as Ka31, Z-8 and Z-9 helicopters, while an E-2-like AEW&C aircraft is also under development.

The vessels do not have catapults, but rather feature the short take-off but arrested recovery (STOBAR) configuration of pop-up chocks in the flight deck which the fighters run up against, before they are retracted and the aircraft fly off a large bow ramp.

China is building a third carrier which will reportedly be nuclear-powered (CVN) and will feature an electro-magnetic catapult system instead of the STOBAR design.

US vows to discontinue ASAT testing