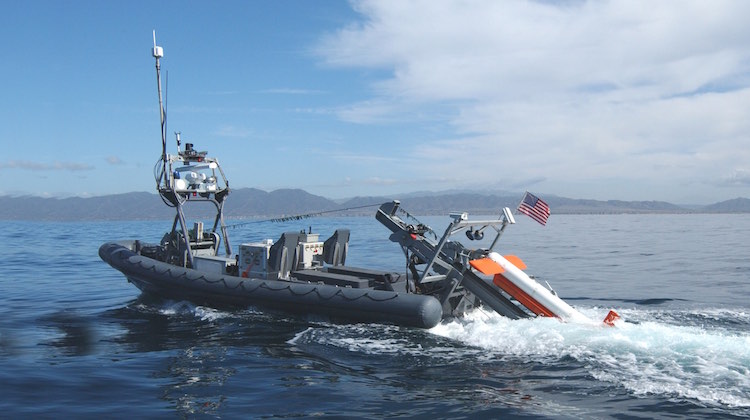 November’s Autonomous Warrior 2018 exercise at Jervis Bay in NSW saw the demonstration of a diverse range of autonomous capabilities to the Royal Australian Navy.

One of those capabilities was the Northrop Grumman AQS-24B autonomous mine hunting system which demonstrated its mine warfare capabilities during the exercise.

The AQS-24B system is comprised of a RHIB-like remote-controlled Mine Hunting Unmanned surface vessel (MHU) and a torpedo-shaped mine-hunting sensor which is towed behind and beneath the MHU. Alternatively, the sensor can be towed behind a helicopter.

During the exercise, Northrop Grumman says the system demonstrated a safe standoff mine hunting and undersea surveillance capability targeted at addressing three key aspects of the mine warfare challenge – reducing the mine clearance timeline; accurate detection, localisation, classification and identification of undersea objects of interest; and improving crew safety by keeping the sailor out of the minefield.

“The demonstration highlighted Northrop Grumman’s leading role in proving the operational utility of unmanned maritime systems in the mine warfare domain,” Northrop Grumman’s vice president undersea systems, Alan Lytle said in a statement. “At operational speeds significantly higher than other mine hunting systems on the market, the (MHU)/AQS-24B combination successfully completed a number of scenarios and challenges that were set by the Royal Australian Navy’s exercise command task group.”

Northrop Grumman has been marketing the AQS-24B since 2015 as an adjunct capability for the RAN’s SEA 1180 Arafura class offshore patrol vessel (OPV) and SEA 5000 Hunter class future frigate programs. The MHU employed AQS-24B has demonstrated an endurance of more than 16 hours from a surface ship.

“We’ve integrated the laser with the sonar so that we can just search that one path and not have to overlap that,” Northrop Grumman officials told ADBR at a Pacific 2015 briefing. “The system is the only one to merge these two different sensor data streams into a single operating picture for the user.

“The data is transmitted in real time back to your shore station or ship, so the contacts can be prosecuted in a much faster timeframe. There are no sailors onboard, so it gets them out of the minefield. It’s much more safety orientated than previous mine counter-measures systems.”

Switzerland selects F-35A as its next fighter