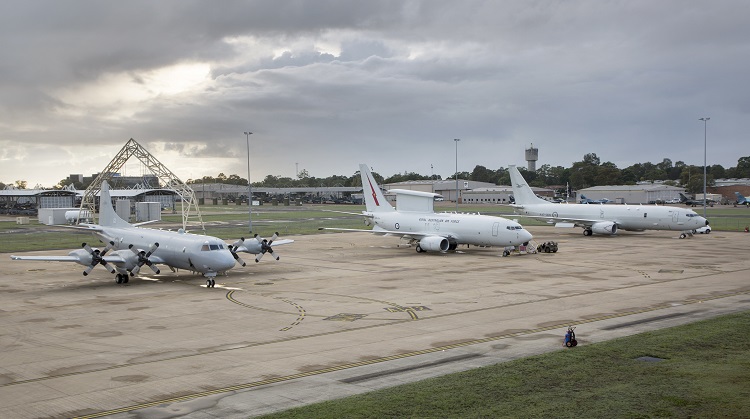 An RAAF AP-3C(EW) Orion, E-7A Wedgetail and P-8A Poseidon at RAAF Williamtown. The AP-3C(EW) is distinguishable from standard AP-3Cs by the deletion of the lower-rear fuselage sonobuoy tubes, and additional upper fuselage antennae. (DEFENCE)

The RAAF’s remaining two AP-3C Orions and their operating 10SQN have been transferred from 92 Wing (WG) to 42WG to better reflect their realignment as a specialist Electronic Warfare Intelligence, Surveillance and Reconnaissance (EWISR) unit.

The two remaining Orions (as well as two RAAF C-130H Hercules) were upgraded with advanced electronic warfare systems by L3 in the late 1990s and early 2000s under Project Peacemate, but until recently the AP-3C(EW)s have not been publicly acknowledged by Defence.

But in the wake of the retirement of the rest of the AP-3C fleet in favour of the new P-8A Poseidon, retaining the two airframes until they are replaced by four Gulfstream G550-based MC-55A Peregrines in 2023 has become harder to justify. The P-3 celebrated 50 years in RAAF service in December 2018, although the AP-3Cs were delivered as new P-3Cs in 1984-86.

Officer Commanding (OC) 42WG GPCAPT Hinton Tayloe welcomed 10SQN into 42WG. “42WG is honoured to command 10SQN and its proven team of EW professionals,” he said. “Ironically, the Orion, given its 50 years of RAAF Service, still leads the way in our understanding of the deciding factor in air combat – electronic warfare.

“With the addition of 10SQN AP-3C(EW), 42WG now has two squadrons under its command – joining 2SQN, operating the E-7A Wedgetail based at RAAF Base Williamtown.” Despite 42WG and 2SQN being based at RAAF Williamtown, the AP-3C(EW)s and 10SQN’s personnel will remain at RAAF Edinburgh where the aircraft’s reduced sustainment footprint is located.

All 12 of the RAAF’s 12 P-8A – eight of which have now been delivered – will be operated by 11SQN and 92WG at Edinburgh. It is yet to be announced what unit will operate the new MC-55As, the Northrop Grumman MQ-4C Tritons or the MQ-9B Predator-B/Reaper unmanned systems.

The two 10SQN AP-3C(EW) Orions join the E-7A Wedgetails of 2SQN under the command of 42WG. (DEFENCE)