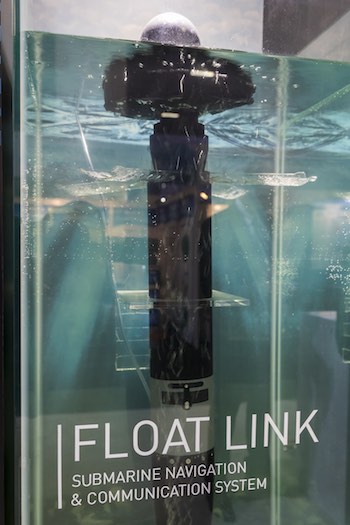 When it comes to communicating to and from submarines, there’s nothing as impenetrable as ocean.

Now Israeli defence firm Rafael has developed a simple single use communications buoy which it says Australia could acquire for the new submarines.

Rafael’s senior marketing director for its naval warfare system directorate Meir Ben Tzook said a major dilemma for a submarine commander was deciding if and when to surface to communicate.

He said FloatLink was a cheap solution which cost in low tens of thousands of dollars, depending on volume. It’s in use with the Israeli Navy.

The basic model can be programmed to begin transmitting for a certain  number of cycles after a pre-set delay to allow the submarine to get well clear. It can transmit text message, data or images.

After pre-set delay, the buoy self-scuttles. Should anyone happen to grab the device, it’s programmed to self-purge data and fry all electronics.

There is no infrastructure requirement other than a laptop and connecting cable.

For two-way communications, the buoy can be kilometres from the sub but connected by the fibre-optic cable.

“If you want more flexibility, you can use another product of ours called DeepLink …. our underwater acoustic communications technology,” said Doron Levi, marketing and business development director for Rafael’s naval warfare systems directorate.

DeepLink is now being used for communicating with divers and with unmanned underwater vehicles.

Rafael also offers other products of potential interest to the Royal Australian Navy, including the Shade torpedo defence suite.

That’s designed to deploy Subscut (for submarines) and Scutter (for surface vessels) decoys which hover at a certain depth waiting to detect active acoustic transmissions from the torpedo.

“It will generate different types of signals. The aim is to seduce an incoming torpedo while the submarine is going away. The torpedo will keep homing on this instead of the surface ship or submarine. It’s effective against most modern torpedoes,” Levi said.

Then there’s Torbuster, a fourth-generation submarine-launched anti-torpedo decoy, which lures the hostile torpedo as close as possible, then explodes.

“It’s unique in the world. We think this is a game changer. We believe this will fit beautifully for the Royal Australian Navy,” he said.