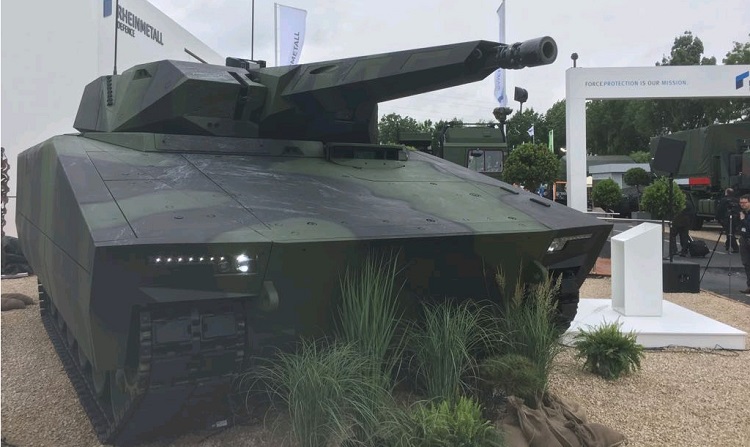 The Lynx KF41 on display at Eurosatory. (Adam Leddy)

Rheinmetall has publicly unveiled its next generation Lynx KF41 infantry fighting vehicle (IFV) at the Eurosatory trade show in Paris.

The new vehicle sees the advanced Lance 2.0 turret integrated with the Lynx chassis that had previously been shown in its KF31 form.

“With the Lynx KF41, the Rheinmetall team has developed a truly innovative next-generation combat vehicle,” global head of Rheinmetall’s Vehicle Systems Division, Ben Hudson said in a release. “The breadth of capabilities that a Lynx IFV provides soldiers results in a veritable Swiss Army knife that has unprecedented utility across the full spectrum of conflict.

“Its modular, adaptable survivability systems allow the vehicle to evolve through life, the high level of mobility will provide battlefield commanders great tactical flexibility in combat, and the diverse effects that the Lance 2.0 turret can generate allow the crew to deal effectively with a wide variety of battlefield situations.”

The Lynx KF41 is a modular family of vehicles that features a common drive module that can be configured as an IFV, an armoured personnel carrier (APC), a command vehicle, a recovery vehicle, or an ambulance. It is powered by an 850 kW (1140hp) Liebherr engine driving through a Renk transmission, and features a flexible suspension system designed and developed by Australian company, Supashock.

Lynx KF41 is expected to be offered for the Australian Army’s LAND 400 Phase 3 requirement to replace the M113AS4 in service.