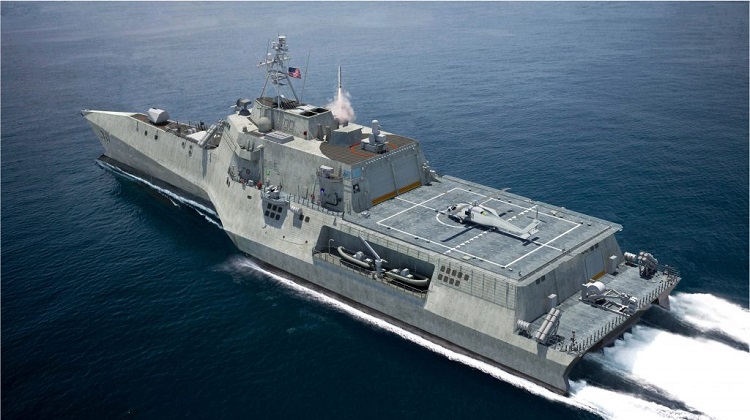 A concept of Austal’s FFG(X) design based on the Independence-class LCS. (Austal)

The US Navy has shortlisted five shipyards and designs for its next generation frigate (FFG(X)) for which it has an initial requirement for 20 vessels.

The contenders are Lockheed Martin, Austal USA, Fincantieri, General Dynamics Bath Iron Works, and Huntington Ingalls, each of which have been awarded US$15m (A$19.1m) contracts for conceptual designs of the frigates.

Four of the designs are evolutions of existing vessels. Austal has offered a growth version of its Independence class trimaran Littoral Combat Ship (LCS), Lockheed Martin has also offered a larger version of its Freedom class LCS, General Dynamics a version of Navantia’s F100-based vessel similar to the F5000 currently on offer for Australia, and Fincantieri a design based on its FREMM frigate in service with France, Italy, Morocco and Egypt. The fifth design from Huntington Ingalls is yet to be declared, but is believed to be a based on its Legend-class National Security Cutter design.

“These conceptual designs will reduce FFG(X) risk by enabling industry to mature designs to meet the approved FFG(X) capability requirements,” a February 16 statement from the US Navy’s Naval Sea Systems Command reads.

“The contracts based on these requirements will facilitate maturing multiple designs during the 16 months of the conceptual design phase, and will allow the Navy to better understand the cost and capability drivers across the various design options. Furthermore, this will inform the final specifications for a full and open competition with a single source award in FY20 for Detail Design and Construction (DD&C) of the FFG(X).”

Unlike the LCS which has been criticised for its lack of firepower, the FFG(X) will have a vertical launch system (VLS) and will be employed in “complex electronic warfare and anti-ship missile threat environments”, both as an independent-deployer and as part of larger carrier battle groups.

I THINK, THEREFORE, I JAM!