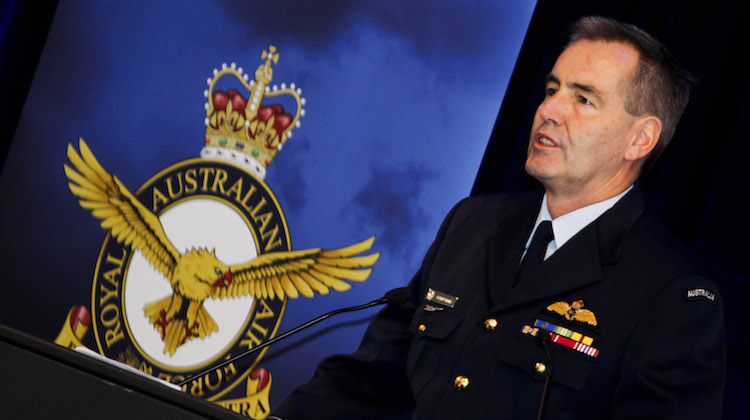 Plan Jericho is described as the first step for the RAAF to meet the challenges of the future. It says more work will continue in 2015, to further develop three themes: harnessing the combat potential of an integrated force; developing an innovative and empowered workforce; and changing the way we acquire and sustain capability.

“Plan Jericho…describes the vector which Air Force will pursue on our transformation path towards becoming a fifth generation enabled force,” AIRMSHL Brown said. “The introduction to service of the F-35A Joint Strike Fighter opens a new era in the distinguished history of our Air Force.”

The intent behind Plan Jericho is to technologically and culturally integrate the new fifth generation capabilities currently in service or due to enter service in the next decade, not just with each other but also with older ‘legacy’ third and fourth generation capabilities. Otherwise, there is a real risk the potential of the enhanced battlespace awareness that will be provided by these new systems with their greatly enhanced sensors and communications capabilities may never be realised.

In launching Jericho, CAF described it as being about much more than the Joint Strike Fighter or about any of the aircraft and platforms. “It is about root and branch transformation,” he said. “It will affect the way we train; the way we fight; and the way we sustain ourselves. We must also transform our relationship with industry to ensure we procure and innovate in alignment with the breathtaking speed at that technological change is occurring in the information age.”

“We understand that our technological edge must also deliver superior situational awareness,” CAF added. “We also understand that we must share this situational awareness and operate as an integrated team across the services, Defence, our national agencies, and our coalition partners. This is the only way we win in the information age. This will demand pervasive change in the way we acquire, share and store the massive amount of information that is now available in the battle space.

“Each of our new platforms will give us a formidable amount of ISR and lethality,” he said. “But the real challenge is to link them in real time so that the copious amounts of information they can gather can be available across our entire force. When that happens – and it will – Air Force can truly claim to be ‘system of systems.’ A fifth generation-enabled force with vastly improved situational awareness and the ability to operate as an integrated team. That must be our goal.”

CAF cited recent operations in Iraq, in the southern Indian Ocean, in the Ukraine as examples of where lessons on not just interoperability but true force integration have been learned.

“Our recent operations have burnished the proud history of the Royal Australian Air Force,” he said. “Moreover, they have given us an insight into the challenges facing air forces in a period of heightened great power tensions; of hybrid wars against non-state actors with the backing of states; of the demands of rapid deployment to provide humanitarian aid to distressed populations; or to repatriate dead or injured Australians from trouble spots overseas. In the past year, Air Force has constituted the long arm of Australian policy.

“In so doing, we exemplified all of the distinctive attributes of Air Power: speed, reach, agility, lethality, precision and discrimination, as well as allowing the government to calibrate our involvement in distant conflicts to a degree that is commensurate with our interests.”

CAF initially flagged his intent to launch Plan Jericho in June last year, and has since been in consultation with senior members of Navy and Army, and with industry on how best to implement the plan. To this end, he has established a dedicated Jericho team comprised initially of two Group Captains who will report to the Deputy Chief of Air Force (DCAF) and the Air Commander Australia (ACAUST).

“Previous large-scale changes experienced varying degrees of success,” CAF said in closing. “One lesson that we learned from our past experience is that plans such as Jericho only succeed if there is widely shared, persistent ownership of the plan. So, rather than take a traditional approach of a top down designed and owned change program, I have decided to empower the future leaders and innovators across the Air Force to design and then implement the Jericho transformation program.”

Feature: OUT OF CONTROL?