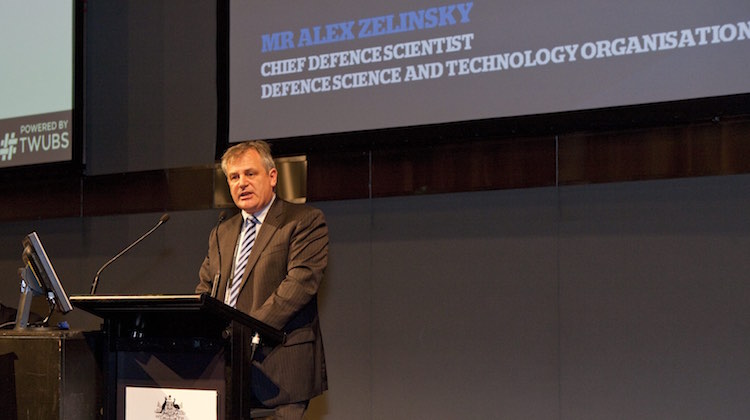 The head of the Defence Science and Technology Group has hailed Prime Minister Malcolm Turnbull’s focus on promoting innovation as an opportunity to kick-start military technology exports from Australia.

Chief Defence Scientist Dr Alex Zelinsky told an industry breakfast at Pacific 2015: “When you change the prime minister you basically change the government and we regard it very much as a new government.”

Dr Zelinsky continued: “Both have said that they are very much on board with innovation and commercialisation of intellectual property. They want us to do the good work in DST Group [formerly DSTO], move it out into Australian industry and ultimately export it. This government, particularly the prime minister, is very strong on that.”

Citing an expectation that Thales Australia will secure export orders for the Hawkei after the Australian government announced that it will buy 1,100 of the domestically-built protected vehicles, he said: “The same goes for all the other technologies we have been working on, so I think there are great opportunities there.

“I think that means a change in culture for all of us to think about innovation first, and of course it needs collaboration – collaboration is the key, working with the companies. And we are particularly looking forward to working with SMEs.”

What was previously known as the Defence Science and Technology Organisation (DSTO) was renamed as part of the implementation the First Principles Review of Defence from the beginning of July.

Dr Zelinsky explained that DSTO had been seen as sitting somewhere on the edge of the Department of Defence – indeed, the First Principles Review considered potentially outsourcing the organisation’s functions.

In the end, that was not thought to be the best course of action and what is now called the DST Group has been pulled back into the heart of the department and is regarded as being a “central cog” within Defence, the Chief Defence Scientist said.

“We have just completed our value proposition and in fact it was accepted last week by the department and the First Principles implementation team. The new ministers have been briefed.

“It articulates what we do and essentially our role in the department is to help the department manage and reduce strategic risk and operational risk while also creating a capability edge and making it sustainable.”

It is understood that the DST Group’s value proposition will be formally made public next week.