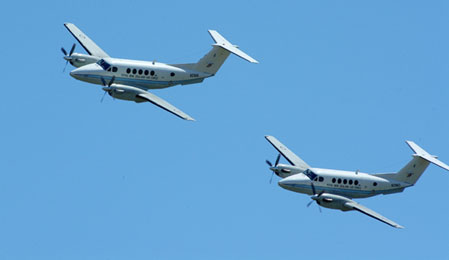 Aircraft sales and support company Hawker Pacific has received an award for excellence from the New Zealand Ministry of Defence.

The award for excellence for the provision of a service to Defence in the less than NZ$15 million category relates to Hawker Pacific’s five-year, performance-based contract with the New Zealand Defence Force to supply and maintain four Beechcraft King Air B200s that was signed in 2012.

The contract has covered a range of modifications to the aircraft before it entered service with the Royal New Zealand Air Force, and maintenance of the fleet operated by 42 Squadron at RNZAF Base Ohakea.

Hawker Pacific general manager for New Zealand Maurice Gordon was delighted to receive the award, given that this is the third year the company had been nominated, following its recognition as a finalist in 2015.

“We are very fortunate to be involved with such a professional and supportive customer,” Gordon said in a statement on November 23. “This award acknowledges the excellence of those 42 Squadron personnel and Royal New Zealand Air Force Ohakea, whom Hawker Pacific work with on a day-to-day basis.”

The award for the provision of a product to Defence in the less than NZ$15 million category was given to MetOcean Solutions Limited, which partnered with the Defence Technology Agency to create the Surfzone View Tool for the Royal New Zealand Navy.

Finally, Kongsberg Defence Systems was judged the winner in the provision of a product or service to Defence in excess of NZ$15 million category.

The company partnered with the Ministry of Defence to “deliver an important capability as part of the upgraded Super Seasprite helicopter project, which is vital for our naval combat capability”.