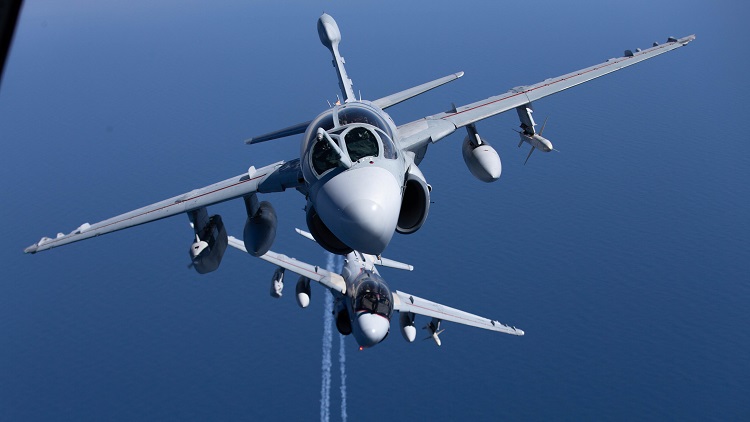 Two EA-6B Prowlers of VMAQ-2 fly off the coast of North Carolina on February 28. (USMC)

The US Marine Corps has retired the last of its Grumman EA-6B Prowler electronic warfare aircraft, with the deactivation of VMAQ-2 on March 8.

With the final flight of the Prowler being made from NAS Cherry Point to the Udvar-Hazy Annex of the Smithsonian Air and Space Museum at Dulles Airport in Washington DC, the type was retired from US service.

The EA-6B entered service in 1971, and has been the mainstay of USN/USMC carrier-borne and land-based electronic warfare operations since. The EA-6B was a development of the A-6E Intruder attack aircraft, and was distinguished by a lengthened forward fuselage and larger cockpit for the pilot and three electronic countermeasures officers (ECMO), and a large hump on the top of the vertical stabiliser for the AN/ALQ-218 radar warning receiver. It carried its AN/ALQ-99 jamming pods under the wings and centre fuselage.

The US Navy ceased Prowler operations in 2017, replacing the aircraft with the EA-18G Growler derivative of the F/A-18F Super Hornet. The USMC will replace its EA-6Bs initially with unmanned systems, with AV-8B Harrier IIs carrying Intrepid Tiger II jammer pods and then the F-35B Lightning II with its powerful organic EW suite, but will also call upon the US Navy’s Growlers for support.